In simple terms, strategy is the ‘how’ part of achieving goals under certain conditions, constraints, restrictions and assumptions. In ancient Greece the word ‘strategos’ was referred to as the role of an individual – a general in command of an Army. A good strategy should equally focus on execution & communication. In Blue Ocean Strategy, there are three simple characteristics or yard stick used to evaluate strategies – Focus, Divergence and Compelling tagline.

To unlock a blue ocean, the company’s value curve should depict these three characteristics.

A good strategy should have a strong focus, and a company’s strategic profile should clearly show it.

A company should not diffuse its efforts on all the factors of the competition, instead focus on the key factors on strategy canvas.

Focus is the key factors where the company has raised its performance or standard in comparison to industry peers to differentiate them. Consider the Indian airline industry where in the early 2000 industry performance was punctuated with late departures & arrivals, coupled with southward moving prices. Indigo Airline’s strategy focused on the factor of timely departure & arrival. It ensured that all its resources are diverted to achieving this goal. Unlike like other airlines like Kingfisher, Jet Airways &p; Indian Airlines it didn’t focus on hot & gourmet cuisine or passenger entertainment, etc

Thus Indigo’s relentless focus on the key factor (On time Depature & Arrival) that it raised on the strategy canvas has not only profitable, but helped it built a loyal customer base in a short period.

Thus the first characteristic, Focus is all about execution of key factors that the organization has raised in its strategic canvas. Customers will have to feel the differentiation.

The value curve of blue ocean strategy always stands apart from the competitors. Reactively formed strategies tries to keep up with the competition, thus loosing uniqueness.

Divergence helps differentiating company from the industry’s average profile and helps them to achieve a leap in value on strategy canvas, such as low-cost business model. It makes the company to stand apart from the rest.

Divergence is where the company has reduced or eliminated certain factors in strategy canvas which will have an impact on the cost without affecting product and service quality and voice of the customer.

Indigo Airlines created a strategy that aimed to differentiate itself from Jet, Sahara, Air India. As a result, it created a service that is better on timely departure & arrival, but reduced & eliminated factors like food, entertainment, etc. thereby creating a value curve on strategy canvas.

Divergence is creates differentiation not by merely providing ‘more’ but instead by not providing or providing ‘less’. It drives the company to resist the old logic of benchmarking the competitors in the industry and look across alternatives.

A good strategy has a clear-cut and easy to communicate tagline. Unless the customers and employees aren’t informed about the strategy, it’s unlikely they would appreciate them. ‘Tagline’, a term that’s close to the heart of marketing folks is also evolved from the strategy canvas of the Blue Ocean Strategy. In simple words, it is a factor(s) which is newly created by the organization and not present in the competitors of the industry.

A strong and truthful tagline on the strategy canvas will give clear message on cost-value offering and create interest to the customers. The effectiveness and strength of a strategy will be determined by a strong tagline.

IndiGo airline created a tagline on strategy canvas by advertising that ‘We believe that we can offer the lowest fares by staying focused, which keeps our costs down without cutting corners or compromising on things that matter.’ They don’t miss to mention about their on-time arrivals performance. 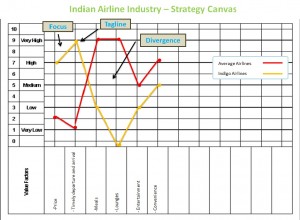 Thus the three characteristics of blue ocean strategy will guide the company to achieve a breakthrough in value for both the customers and for themselves. Focus will help to retain customers, divergence will reduce the cost to the company and the compelling tagline will invite customers to the company.